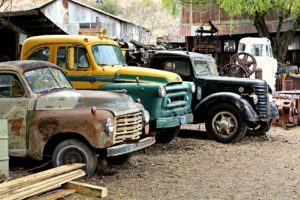 My grandmother has had a rusty old sedan in her garage ever since I can remember. She gave up driving years ago, but never got rid of the car–thinking she’d get back on the road someday. Well of course she never did, and the car sat there rusting and breaking down in the garage. It was an eyesore and I’m sure the neighbors hated it as much as we did.

Many times we tried to convince her to sell it either to me or my brother when we just started driving (and it wasn’t so run down) or to a junk car buyer, like Junk Car Traders. However she never followed through, claiming to still need it or that she’d get around to it.

This may sound like a familiar story to you. Maybe you have a parent getting up in years and no longer driving, maybe an aunt or uncle has a rusty truck that they’ve replaced but never got rid of the original. It may frustrate you to see such an ugly thing clogging up their yard. But don’t worry, there is hope and you can get them to get rid of it!

When getting rid of a junk car, there are two traditional routes — sell it or donate it. Selling the car could be to a private buyer or auto salvage yard, and is often the easier route. But donating it can be a good deed and help a local charity.

In the case of my grandmother, she decided to donate the car to Kars4Kids. This way, the charity can either use the car to run deliveries or continue their work in the community, or they can sell it (to someone like us) for some money. If your junk car no longer runs, the charity could just be a middleman between you and us, because they’re going to sell it anyway. If that’s the case, it can often be smarter to just sell us the car and then donate the money–saves everyone some hassle!

If your relative is dragging their feet on selling the car, explain to them how simple it can be! You just give us a call at 855-959-1325, talk to one of our friendly agents to get a quote, and set up a time to have the car picked up. We’ll meet you within 24 hours to make the exchange. Couldn’t be easier! Their investment time is likely to be less than 15 minutes and they’ll walk away with a few hundred extra in their pockets.

That junker is just wasting space on their lawn. We will give that car a second life and you a nice lump of pocket change. Win-win for everyone!