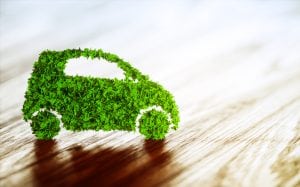 These days, people are concerned with their carbon footprint. As our impact on global temperatures becomes increasingly clear, and as mounting scientific evidence suggests that humans are responsible for changes occurring to our climate, more and more concerned citizens are looking for ways to lessen their individual impact on the planet.

There are a lot of tips and tricks that you might already be familiar with. For example, you can be sure to switch your lights off at home in any room that you’re not currently occupying. When showering, you can be mindful of how much hot water you’re using. In the winter, you can turn down your thermostat and put on a sweater instead of keeping the heat running constantly; and, in the summer, ceiling fans are an energy saving alternative to your air conditioning system. And, of course, don’t forget to reduce, reuse, recycle.

That said, one of the largest impacts we have on the environment comes in the form of our automobiles. While it’s great that some people are able to kick the car habit altogether and switch to a bike or public transit, that’s simply not an option for everyone. Particularly in the United States, the vast majority of towns, cities, and rural areas simply aren’t set up for bicycles and public transportation.

Still, there are things you can do to make your car more environmentally friendly. Read on to learn more.

It’s a straightforward concept: the heavier your car is, the more fuel it takes to propel it forward. That’s why small, fuel efficient vehicles (even non-hybrid ones) can get upwards of 50 miles per gallon, while a Hummer only gets 12 mpg. The same way that a smaller car is more efficient than a bigger one, a lighter car is more efficient than a heavier one. While you may not be able to shrink your car, you can change what you’re hauling around in it. If the back of your car is full of items that you don’t really need to be carrying around–such a couple of mountain bikes that you used a month ago, but haven’t take to a trail since–pulling them out can save on gas.

We don’t mean that you have to putz around town going 10 mph. However, your car’s greatest fuel economy is usually at around 55 mph. So, if you’re on the highway, consider slowing down a bit. In fact, some vehicles will use about 25% more gas when traveling at 75 mph than they will at 55 mph. Ease up on the gas pedal, and you can dramatically increase your fuel economy.

Turn off the A/C, unless you’re on the highway

Here’s the thing: your A/C uses a lot of energy. Turning it off can dramatically cut back on the amount of fuel you’re using. However, there’s an exception to this rule. If you’re going down the highway and roll down your windows instead of using the A/C, the amount of drag that your car experiences (from air coming into the car through the open windows) will actually reduce your fuel economy. So, when on the highway, keep your windows up. If you’re just rolling through town at slow speeds, rolling down your windows and turning off the A/C can save on energy.

If you’ve got an old junk car that you’re looking to sell, consider Junk Car Traders. We’re an auto recycler, which means that all of your vehicle’s components, particularly its scrap metal, will be diverted from the landfill and reused for manufacturing new items. In Iowa we create value out of the metal components of your car rather than the function. If you’re looking to sell your junk car, check out our website at JunkCarTraders.com.