Repair Shops Under the Spotlight

Over the years, the number of licensed drivers in the United States has consistently increased (228.7 million in 2019), and to help maintain safety, more cars on the road equates to a greater need for repair shops. A flat tire here or a mysterious clunking sound there typically means a visit to one of these shops is imminent. The question then becomes, who can you trust with your vehicle, and how sure can you be about the services deemed necessary to keep you safely in the driver’s seat.

Using the Yelp Fusion API, we pulled auto body shop locations across the 100 most populous cities in the U.S. to access their ratings and assess the worst and best places to get a car worked on. Additionally, we focused on the most common car repairs and asked car owners about their past experiences with these services – do they feel they are overpaying or maybe even being scammed? Keep reading to see what drivers really think about the state of America’s auto body shops. 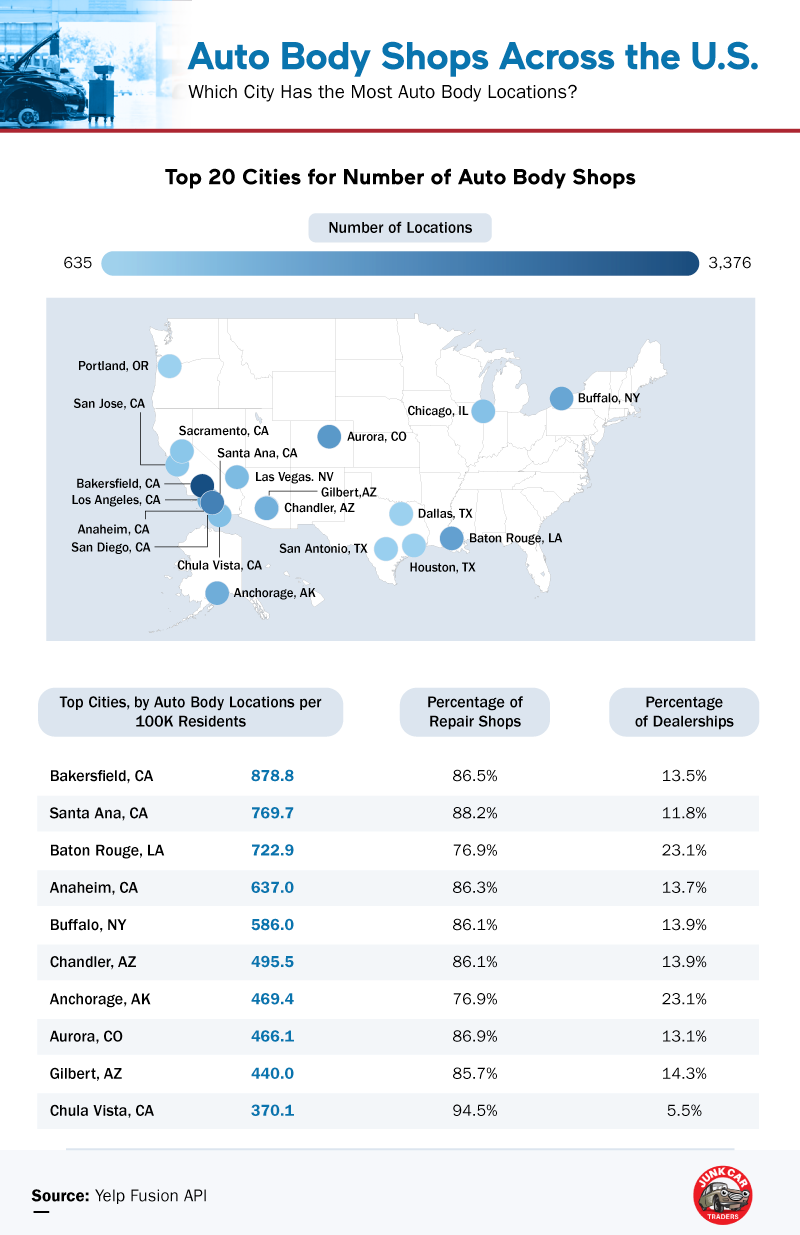 Per 100,000 residents, the city of Bakersfield, California, had the most auto body locations at 878.8, which is 109 more than the next location – Santa Ana, California. In 2018, California had the highest number of registered automobiles by far at 15,065,827 – the next leading state was Texas at 8,248,322. Being that Bakersfield and Santa Ana are both in California, it makes sense that three out of the top four cities (including Anaheim) with the most auto body shops would be located in the state with the most cars.

Also, there were significantly more repair shops than dealerships in the cities listed. The biggest discrepancy was in Chula Vista, California, where only 5.5% of auto body shops were dealerships. At its highest, dealerships accounted for 23.1% of body shops in Baton Rouge, Louisiana, and Anchorage, Alaska.

Avoid at All Costs

Across the U.S., people seemed to have a slightly better experience at repair shops, with an overall average rating of 3.95 stars out of 5, compared to dealerships scoring an average 3.04 out of 5 stars. There are a number of reasons as to why people might not enjoy their experience at dealerships. One might be the ‘pushy salesman syndrome’ – many people get frustrated by ambitious, yet aggressive, salesmen who do their best to sell their product.

Regarding repair shops, the lowest rated city was Norfolk, Virginia, with an average rating of 3.58. The city averaged relatively few reviews at 11.7, and 8.6% of its locations had a 2-star rating or below. Only the city of Arlington, Texas, had more locations (8.8%) 2-stars or lower. The worst city for dealerships was Spokane, Washington – it had an average rating and number of reviews of 2.45 and 22.8, respectively. From the city’s various locations, 4.4% were 2-star or below, and Indianapolis had the most with 9.9% fitting into this criteria.

People seemed to favor repair shops over dealerships – but which cities have the best and worst ones? Virginia Beach had the highest number of repair shops 4-stars or over at 9.8%. The top 5-star shop in the city – Wings Mobile Detailing – was reviewed by 51 happy customers. According to the customer reviews on their website, it looks like they run a tight ship.

People were not as impressed with the repair shops in Irvine, California, as only 1.4% scored 4 stars or higher. Although, according to 176 reviews of Auto Craft Mercedes-BMW, which is located in the city, this particular establishment was worthy of 5 stars.

In general, though, the highest rated city for car repairs (with at least 10 reviews per location) was Glendale, Arizona, and the lowest was the Virginia city of Norfolk.

It Costs HOW Much? 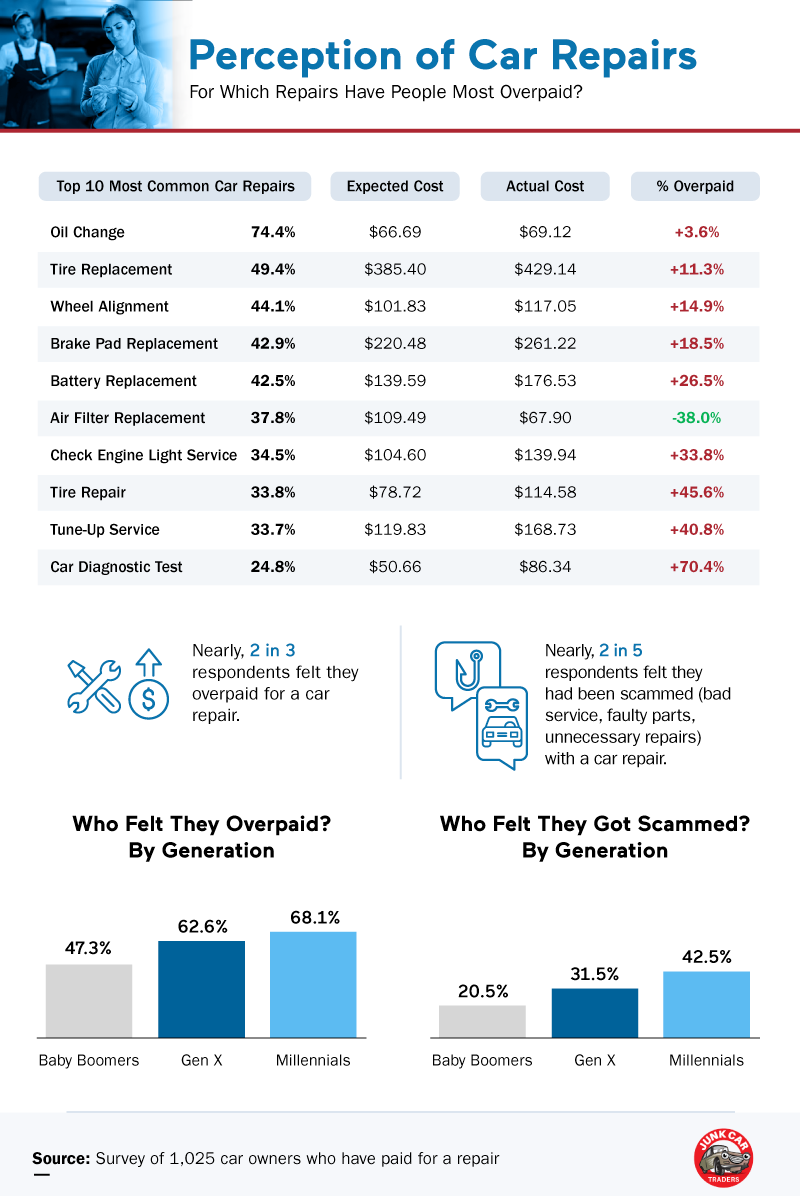 By a margin of 25%, the most common car repairs were oil changes, and customers only paid 3.6% more than they had originally expected for the service. For car diagnostic tests, drivers were way off with their expectations – customers paid 70.4% more than what they thought would be the case. The only repair that respondents overestimated were air filter replacements – they cost 38% less than anticipated.

Seeing as respondents underestimated 9 out of 10 car repair prices, it’s no surprise that two-thirds of them felt as if they overpaid, while two-fifths felt they had been scammed altogether. There are a number of car repair scams to look out for. For example, not all flat tires need to be replaced – oftentimes, you may be advised to buy new tires even when the existing one(s) can be repaired. It’s important to ask your service adviser for a thorough explanation before making a final decision. When it came to generational discrepancies, millennials felt they overpaid and got scammed more than Gen Xers and baby boomers.

Clearly, people have mixed attitudes toward their local car repair shops and dealerships. Pushy salespeople can rub a lot of people the wrong way when looking to buy a car, giving dealerships a bad rap. Also, some repair shop workers try to coax customers into buying unnecessary replacements.

Whenever a car consideration needs to be made, either to repair or simply service, it’s important to make sure you are well-informed before making a final decision. Additionally, it is essential that you feel you are getting the right price and exceptional service. Trust Junk Car Traders to set you up for success – head over now to get instant assistance and service.

For the first half of the study, we collected data from the Yelp Fusion API for specific auto body locations (keywords: autorepair, autocusomization, auto_detailing, bodyshops, and car_dealers) within the top 100 U.S. cities by population. Data were requested on February 8, 2021. Data excludes locations that fall outside city limits. The final number of locations analyzed in this study is 47,778.

For the second half of the study, we used Amazon MTurk to collect responses from 1,025 car owners who had paid for a car repair or service previously. Of the 1,025 respondents surveyed, 44.4% were female, 55.1% were male, and 0.5% identified as nonbinary. The average age of respondents was 38.3 with a standard deviation of 12.19 years.

The main limitation of this half of the study is the reliance on self-report, which is faced with several issues, such as, but not limited to, attribution, exaggeration, recency bias, and telescoping. Data are solely representative of self-reported claims by respondents. This survey ran during February 2021.

To all car owners – are you satisfied with the repair shops and dealerships in your area? If you think a family member or friend might enjoy the contents of this article, feel free to share it with them. We only ask that you do so for noncommercial use and that you provide a link back to the original page so the contributors can earn credit for their work!