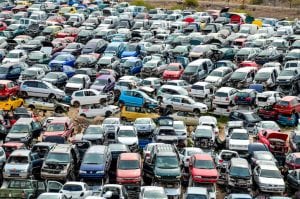 Are you considering selling an old junk car? If so, you’re probably going to proceed in one of a few ways. You might try selling to a private buyer in your area, which would likely involve taking out a classified ad online. This rarely works, though, as junk cars aren’t particularly popular with private buyers. Similarly, you could try selling to a dealership. But, again, dealerships are a lot like private buyers in the sense that they rarely buy junk cars.

Instead, a lot of people with junk cars end up contacting a junkyard or scrap yard in an attempt to sell their vehicle. These “wrecking yards” (as they’re often called) can be intimidating places. If you’ve ever been to one, you probably have a sense of what we mean when we say “intimidating.” They can be vast, expansive, crowded, and confusing. They’re full of cars, trucks, vans, SUVs, station wagons, and other vehicles. There are cars rusting away into nothing, fairly new vehicles that were totaled in accidents, and all sorts of cars that have been slowly disassembled to the point where the original vehicle is unrecognizable.

What exactly goes on at a wrecking yard? How does the process of transforming your junk car into scrap metal actually work? How long does it take, and what’s involved?

Most wrecking yards concern themselves with auto recycling: that is, returning the raw materials of a vehicle to the beginning of the production process. With this in mind, most vehicles coming into a wrecking yard have to undergo a particular process, one which results in their base materials (scrap steel, aluminum, and so on) ending up back in an assembly line.

When a junk car arrives at a wrecking yard, the first thing has to be attended to is the draining of its fluids. It’s unsafe to attempt to disassemble a vehicle when it’s full of hazardous chemicals. After the gasoline and oil are drained, all of the other fluids have to be removed, too: power steering, brake, transmission, and so on.

With these fluids out of the way, the vehicle is usually stripped for any valuable parts. These parts are often restored and sold as “rebuilt” to local mechanics and consumers.

After all of the valuable parts have been removed from a vehicle, it needs to be crushed. This often happens with the aid of an enormous machine that essentially punches the top of the car flat. Once the vehicle is significantly more compressed, it’s run through a metal shredder. This chops the car into small chunks of metal. These chunks of raw material are then sorted by type (steel, aluminum, and other materials). Finally, the base materials are shipped off to be smelted and reworked into new products, including new cars.

Do you have a junk car you’re ready to sell? Bypass the stress of dealing with a wrecking yard, and just call Junk Car Traders.  We have great costumer service in Ohio, our goal is to make this process easy for you. We pay top dollar for junk cars, and working with us is easy. To learn more, check out our website: JunkCarTraders.com.